The Rock Restaurant is a world-exceptional and famous restaurant sited distinctly on a huge rock in the Indian ocean, in front of Michanwi Pingwe beach on the south-east coastline of Zanzibar, Tanzania, East Africa. The south east coastline is one of the most beautiful coastlines in the world.

Originally a fisherman’s post, it has been transformed into one of the picturesque spots of the Island. It capitalises on its topographic location and viewing potential to draw visitors and customers.

During high tide, the restaurant is completely surrounded by a large body of glistering water, making it appear as a floating restaurant or an Island of its own and when the water recedes during low tide, it is surrounded by beautiful beach sand. 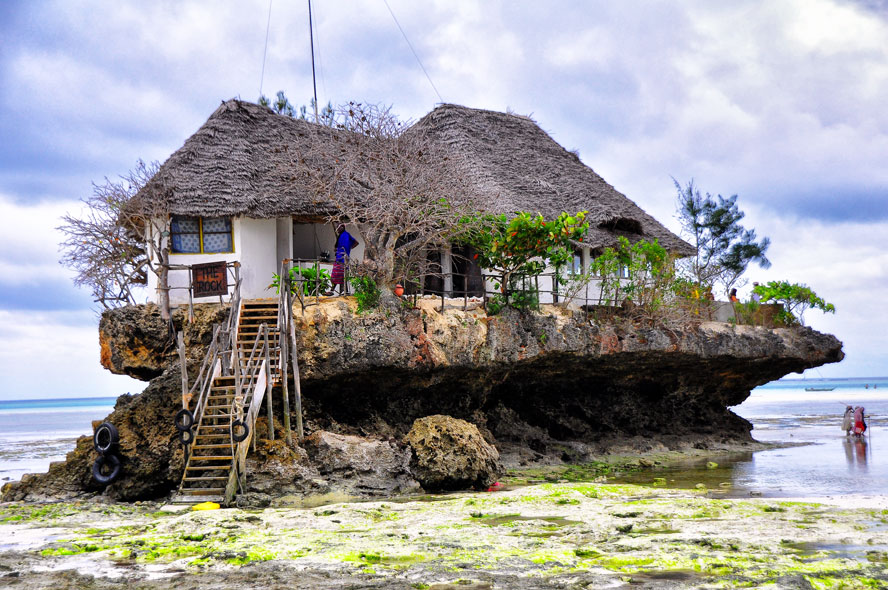 Not only unique for its location, but also for its legendary mouth-watery delicacies inspired by the freshly available natural resources provided directly and organically by nature. It therefore gives you the exceptional opportunity to have fresh seafood divinely prepared in the most amazing and super-romantic setting, giving you an eating experience you cant afford to miss or get elsewhere. However, the food is quite pricey, but it is a case where the location matters more than the food and i assume you are indirectly paying for the view and feeling you may not get elsewhere. Fair enough, right?

This magical seafood restaurant, serves up to 20 tables, all facing an unforgettable view of the ocean and once here, your photography reflex and instinct is quickly awakened and you could be taking pictures of breathtaking views all the way.

I tell you, nothing like eating a freshly prepared lobster and watching a huge and powerful ocean tide rising and charging towards you as if coming to say hello while you are seated in this magical place and ultimately been surrounded by the glittering ocean water(Floating and dinning on the ocean). I would say it is a top and beautiful experience you might want to have.

Most people have described it as the most beautiful restaurant in the world, and i couldn’t agree more. It has become one of the most visited places in Zanzibar and a must see if you go to Zanzibar and prepare to be impressed.

P.S: IMAGES NOT OURS UNLESS STATED.

The Ultimate Guide To Gorilla Trekking In Uganda And Rwanda

Umoja Village: A Village Without Men.

5 Places You Should Absolutely Visit While You Are In Mozambique